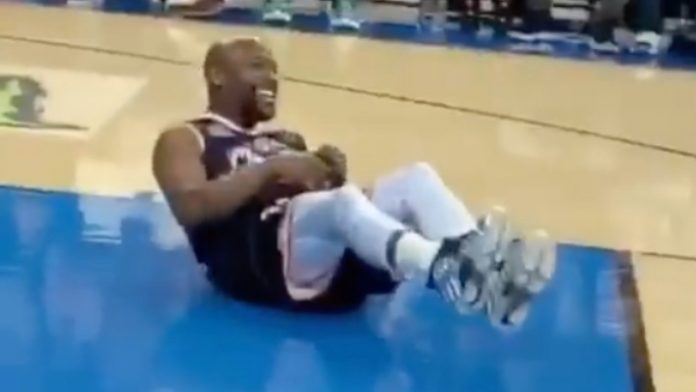 During the game, Mayweather came head-to-head with Larry “Bone Collector” Williams. Williams crossed Mayweather up on the court, resulting in “Money” getting his ankles broke and eating it on the court floor.

To make matters worse, Williams also sank a three-pointer. The entire audience in attendance gave an amused reaction while Mayweather himself laughed it off. Check out the clip here:

Mayweather is, arguably, the greatest boxer of all time with an undefeated record of 50-0. In his last outing, Mayweather picked up a TKO defeat over UFC star Conor McGregor. It also marked his 50th consecutive victory. There has been chatter about Mayweather potentially returning to the ring soon, however, the undefeated boxing legend seems to be enjoying retired life.

Rematches against the likes of Manny Pacquiao and McGregor certainly sound financially appealing, and Mayweather has been open to doing exhibition bouts similar to the one he did against Tenshin Nasukawa.