Home Boxing News Alvarez-Kovalev: Who Has the Upper Hand? 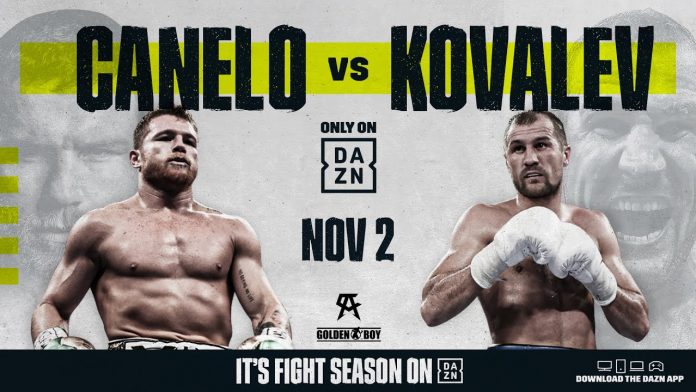 Sergey Kovalev (34-3-1) and Canelo Álvarez (52-1-2) are set to square off on November 2. The Mexican is jumping yet another weight class for this bout, which will be for Kovalev’s WBO light heavyweight crown. The fight will be streamed on DAZN, and will feature two of this generation’s finest boxers.

But who has the upper hand? Both Álvarez and Kovalev have had distinguished careers. At this point, however, their paths have diverged. Álvarez, the Mexican sensation, is 29, and in his athletic prime. He is unbeaten in six years, with his last loss dealt in 2013 by Floyd Mayweather (50-0). Kovalev, the Russian warrior, is 36, and is showing signs of fading. He is 4-3 in his last 7 fights, with 2 of those losses coming via TKO.

Needless to say Álvarez has the upper hand — his disadvantages in height and reach notwithstanding. Since losing to Mayweather, the Mexican has only gotten better. Álvarez evolved through the years, going from all-action head-hunter to disciplined, well-rounded tactician. “I’m a fighter who knows how to adapt to all circumstances,” he told The Los Angeles Times. “I can fight different ways, too.”

Lately Álvarez has been at his best, dispatching Gennady Golovkin (40-1-1), Rocky Felding (27-2), and Daniel Jacobs (35-3) in a six-month span. The win over Golovkin is noteworthy. Triple G is similar to Kovalev: Both are heavy-handed, all-forward pressure fighters. But Álvarez figured out Golovkin, and all but neutralized him for long stretches.

In contrast, Kovalev has been largely up and down these past three years. Unbeaten in his first 31 fights, Kovalev finally met his match in Andre Ward (32-0). The Olympic gold medalist dealt Kovalev his first defeat, though some felt the Russian had done enough to win. In the rematch, Ward left no doubt, stopping Kovalev in the 8th with a series of body shots. Those twin defeats seem to have taken the air out of Kovalev. Since then he has been unable to recapture the form that earned him his Krusher moniker. In fact, he was even stopped by Eleider Álvarez (24-1) in August of last year.

Kovalev did enough to beat the Colombian in their rematch last February. However he hardly looked impressive. If anything that rematch underscored Kovalev’s deteriorating form. This form was replicated in his most recent fight. bwin Boxing thought the Russian would have a hard time against the up and coming Anthony Yarde (18-1), who, like Ward, is a technician, but with more power. The prediction was spot-on, though Kovalev won in the end. Brian Mazique’s recap of Kovalev-Yarde for Forbes reported how the younger Yarde dominated rounds 7 through to 9. “Yarde’s shots,” Mazique wrote, “had Kovalev looking out on his feet by the end of the eighth round.” Tellingly Kovalev trainer Buddy McGirt was close to stopping the fight. But Yarde faltered, while Krusher found a second wind en route to an 11th round TKO win.

In the upcoming fight Canelo Álvarez has the upper hand. But that doesn’t mean this fight won’t be compelling — and competitive. Kovalev is a veteran and a hard hitter. That means this bout will likely be a war of attrition: Kovalev pressing forward and Álvarez picking his spots. In the end, however, the Mexican will probably get his hand raised.