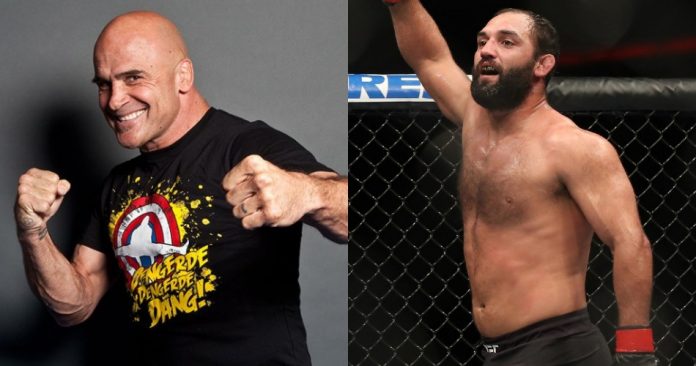 Johny Hendricks is not a fan of former UFC heavyweight champion Bas Rutten at the moment.

Rutten served as the president for the World Bare Knuckle Fighting Federation (WBKFF). The promotion held its first-ever event from Casper, Wyoming on November 9, 2018. However, many fighters were not paid for their performances on the card. One of those fighters being former 170-pound champion Johny Hendricks.

Hendricks suffered a knockout loss to Dakota Cochrane on the WBKFF card. Speaking on the “Pull No Punches” podcast recently, Hendricks suggested Rutten had to know something about the issue with fighter pay before everything went down.

Rutten has responded with a lengthy post on his official Facebook page. Here’s what he had to say:

“So I had a “nice” surprise this morning, an article in where Jonhy Hendricks tells people that “Bas Rutten HAD to know about the WBKFF not be able to pay their fighters”. Wow, when some ignorant people believe this, I don’t really care, but once a fighter believes that? Come on now Johny, not cool, you know I am there for you and the fighters.

“I told you personally, AND EVERY OTHER FIGHTER IN WYOMING BEFORE THE SHOW (ask them all), that I saw the bank statements from Tom the owner and had “proof of funds” before the show. Proof that he had enough money in the bank to pay the fighters because this was to me the most important thing of all.

“I was going to post a piece again today but than I thought, nah, lets drive to Vegas tomorrow and be on MMA Junkie, this way they can ask all the hard questions and I will bring my computer so I can show George and Goes my emails with that bank statement (proof of funds), plus I also have the proof of his bank account being frozen and his admission papers from the hospital. I bring those because Chris Leben, Johny and some others have said: “This was a scam from the beginning, his bank account never got frozen and he was never in the hospital”.

“Tomorrow you will see that what they claimed was all 100% Incorrect and I have the proof that the bank DID get frozen and that Tom WAS in the hospital. Will tell also some other things that many don’t know yet, so please, don’t start commenting right now, don’t be like the majority of people nowadays and make assumptions before you know both sides of the story, before you know the TRUTH.

“Like this one: I was hired as a commentator in the beginning and was never the president of the company, wait, what? Yeah, the outside world thought I was, but I never signed a contract. I will explain how that all went down as well. And there is much more. So please tune in tomorrow for MMA Junkie at 5PM pacific. Godspeed to all of you!”