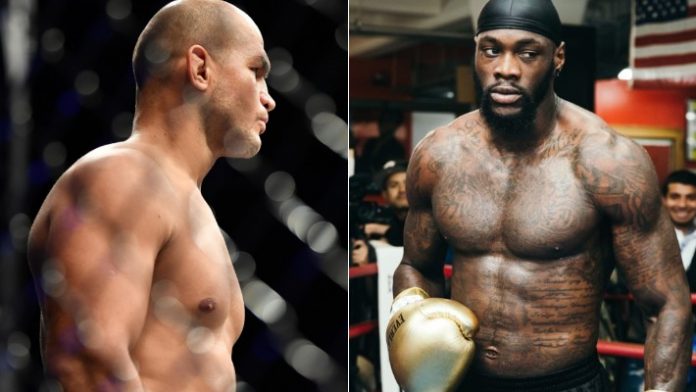 Ngannou is a man who believes he himself could have a career in the boxing ring. “The Predator” possesses some of the most fierce punching power in combat sports today. “Cigano” has a tall order against the Frenchman this weekend in the main event of UFC Minneapolis Saturday night (June 29, 2019) from the Target Center.

Speaking to MMA Fighting, however, dos Santos claims that if he bests Ngannou this weekend, he wants to call out Wilder:

“Klitschko actually replied to me, he said anytime, anywhere, something like that. But then I lost my belt, I lost the fight to Velasquez and I lost the belt so it didn’t make much sense anymore to promote that fight.

“Now my biggest goal is to go back, fight for the title in the UFC, take the belt back and then start promoting a fight against one of the boxing champions.”

Wilder is currently awaiting an official date and venue for his planned fight with Luis Ortiz. If he can maintain his undefeated record and get past the heavy-hitting Cuban, he’ll meet Tyson Fury in early 2020.

It’s hard to believe Wilder would put those plans on ice to meet dos Santos in the ring. However, dos Santos is confident the fight can happen given Wilder is reluctant to turn down any challenger:

“I think and I already have this idea in my mind who it could be. It could be Deontay Wilder because everything I see about Deontay, he’s a great champion, he knocks everybody out and he doesn’t run away from a good match,” dos Santos said. “He accepts all the matches. Some of the guys pick fights but this guy is not picking fights.

“He’s fighting everybody. So I think if we have a good match and we are able to make people want to see that fight and there’s a chance it could happen. I’ve been watching him for a long time. I actually admire him. His boxing skills are different but I think that’s the perfect match for me.

“I can see many, many holes in his game. Can you imagine I’m not worrying about no takedowns, no kicks, no jiu-jitsu, only boxing. That would be paradise for me.”

Do you think there’s any way a fight between dos Santos and Wilder develops?