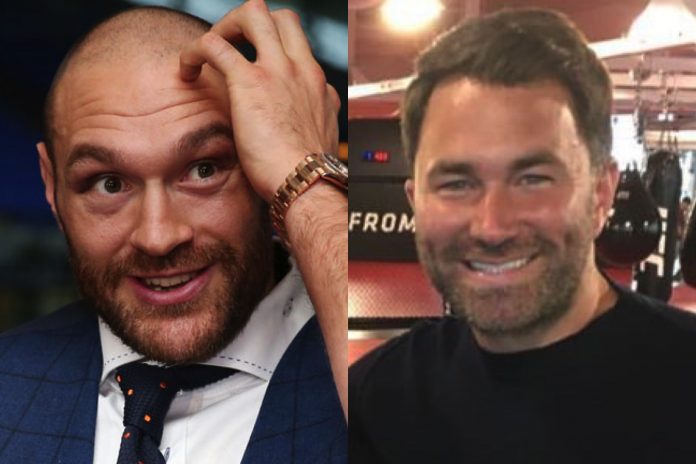 The majority of the boxing world wants to see Tyson Fury rematch his rival Deontay Wilder for the title soon, or even face Anthony Joshua.

Unfortunately, however, that won’t be happening soon. Wilder will defend his WBC heavyweight title against mandatory challenger Dominic Breazeale this Saturday from the Barclays Center in Brooklyn, New York. Joshua will face Andy Ruiz. Jr. on June 1. Fury, on the other hand, will face German Tom Schwarz on June 15th from the MGM Grand in Las Vegas.

The fights are an opportunity to watch three of the heavyweight division’s best boxers, that much is true. However, many fans believe the heavyweight division could be in a much better state if the weight class’s biggest names could reach an agreement to fight each other. With all three of Wilder, Fury, and Joshua having signed their own respective streaming deals, that doesn’t appear to be likely as of now.

But that hasn’t stopped the online beef between Joshua’s promoter Eddie Hearn and Fury. With trash talk flowing, Hearn has recently been in the headlines about a possible collaboration with Dana White. He’s also lashed out at Fury.

Fury recently opened up on the beef in an interview with Behind the Gloves. In it, Fury took the proverbial gloves off by suggesting Hearn simply has a ‘man crush’ on him, and that’s why he says nasty things:

“There’s nothing going on. Is there something going on online? Eddie loves taking a bit of stick from me. He’s a fanboy. Eddie Hearn is a tit. And he knows that. And I know that, and the rest of the world knows that.

“Eddie Hearn’s got a man crush on me, that’s all it is. So when somebody fancies somebody, they do nasty things to them all the time and they talk s*** about them. So whenever you see Eddie Hearn saying all the bulls*** about me, and you get me responding back to him, it’s because he’s got a man crush on me and he obviously fancies me. Don’t you Eddie? I’m going to take him out for a drink the next time I see him.”

No Place To Talk

‘The Gypsy King’ continued on that Hearn really didn’t have a place to be talking trash about him, as he’s never fought in the ring. He even offered a light-hearted ‘truce’ to Hearn:

“We fight one-on-one to entertain the customer, entertain the fans. So when you get people like Eddie Hearn saying negative stuff about me, I look at it and I say, ‘You know what, Eddie? You’ve never had a fight in your life, so how can you call me and say I’m s***, or whatever?’ Because you can’t fight. If you could, you’d be a world champion and I wouldn’t.”

“And I understand that he’s a promoter and he has to try and run me down to make his fighter look better, it is what it is. I’m sick of all the bulls*** games. I say we call a truce.”

But the truce stopped short if Hearn spoke another word about him, Fury said. If he did, Fury had a threat for him:

“On the next negative word you say about me, I’m going to slap all your teeth in for you. I hope that I’ve got that across to the person who’s watching. For people who don’t fight to call fighters who do fight is a joke. Because until you’ve been punched in the face in a boxing ring, you don’t understand what it’s about.”